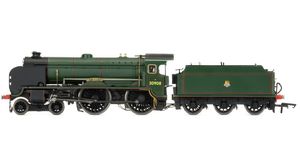 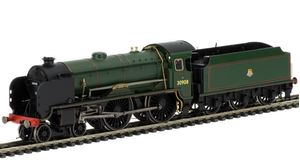 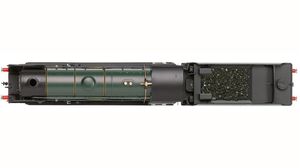 The Schools Class 4-4-0 locomotives were designed by Richard Maunsell and were originally classified as Class V.

A total of 40 of these powerful express passenger steam locomotives were produced at the Eastleigh Works and numbered 900 – 939 by Southern Railways. Utilising some of the designs used in the Lord Nelson Class, the Schools locomotives had a weight of 110 tons. This Class represented the last of the type of locomotive built in Great Britain, which used the 4-4-0 wheel arrangement.

Introduced to revenue earning service between the years 1930 – 1935, these engines were smaller than the Lord Nelson Class and were deemed to be the most powerful locomotives of their kind built in Britain, carrying a shortened King Arthur boiler and featuring three cylinders. In 1938, locomotive 926, “Repton” achieved the fastest speed ever recorded by a member of the Schools Class, which was 95mph!

The Schools Class design was heavily influenced by restrictions on the intended Tonbridge to Hastings line. The shortened wheelbase was a result of the sharp curves and loading gauge of the tunnels on this line with track work on the Hastings line having had to be upgraded to accept the new locomotives. Well-liked by crew members, these locomotives were 59’ in length and could carry a coal capacity of 5 tons.

Each of the locomotives in the Class were named after English Public Schools and so it became a common and recognised classification for this group of locomotives. The Extension of the Class caused the `Southern Railway to include names of “foreign” schools that were outside the catchment area such as “Malvern” and “Rugby”. Thereafter, for official naming ceremonies, Southern Railway sent the unnamed locomotives to a station near to the School after which they were to be named.

The first produced Schools carried the standard livery of Maunsell Olive Green. During the lifetime of the Class various other liveries adorned the locomotives including Bullied Malachite Green, Bullied Black with yellow lettering, BR Black and finally BR Green. In 1963 most of the locomotives in the Schools Class had been withdrawn, however three were saved for preservation and they are 925 “Cheltenham” which is part of the National Collection, 926 “Repton” and 928 “Stowe”.

Released to traffic from Eastleigh Works on the 30 September 1931, locomotive no. 908 was named “Westminster”, being named after the public school situated in the centre of London. Later re-numbered by British Railways to 30908,

“Westminster” was eventually withdrawn on the 30 September 1961 and scrapped at Eastleigh one month later.