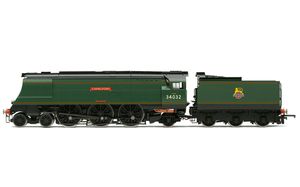 Known collectively as Light Pacifics and Nicknames Spam Cans, the Southern Railway West Country and Battle of Britain classes were designed as air smoothed 4-6-2 Pacific locomotives by the Southern Railway Chief Mechanical Engineer, Oliver S. V. Bulleid. These locomotives were designed to be lighter in weight than the similar Merchant Navy Class so that they could be used on a wide variety of routes including the Kent coast and the South West of England.

The SR Light Pacifics were constructed using new techniques of the time for building locomotives, including welding as part of the building process and the use of steel fireboxes, all driven by the need for ease of construction during wartime austerity years and post war economines.

An order of 20 none specified locomotives was placed with the Southern Railways Brighton Works in 1941, although it was in 1943 that Bullied identified a need for a steam locomotive capable of mixed traffic duties. Knowing that the Merchant Navy locomotives were too heavy for certain routes the eventual design reflected many of the features of the Merchant Navy Class but was 2 feet shorter, several tons lighter and paired with a smaller tender, all allowing for the newly designed Light Pacific access to virtually all routes on the Southern Railway. The building of the new locomotives commenced in 1944 with the first being outshopped by the Southern Railway in May 1945, however by that time the order had been increased to 30. The first of the Class, designated West Country was given the number 21C101 and named ‘Exeter’.

Before the first order of twenty locomotives were completed a further 15 were ordered all of which had been built and in service before the end of October 1946. A third batch of twenty five were ordered, however this time they were designated as the ‘Battle of Britain’ Class but were identical to the previous West Country Class locomotives. In January 1948 there were already seventy Light Pacifics with a fourth batch of twenty from the Brighton Works who had to enlist the help of the Ashford and Eastleigh Works to complete the order. The last of the Class to be built was locomotive No. 34110, ’66 Squadron’.

Over the following years all of the Light Pacifics were subject to mechanical and body changes with some being totally rebuilt in the same way as the Merchant Navy Locomotives.