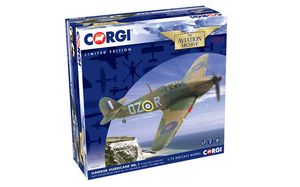 No.151 Squadron received its first Hurricanes in December 1938. After serving defensive patrols in the opening chapters of World War Two the Squadron went on to cover the evacuation fleet at Dunkirk and flew missions over Northern France during May and June 1940. Pilot Officer Irving ‘Black’ Smith from New Zealand joined the Squadron in July 1940 and quickly became involved in the Battle of Britain during which he scored six kills. Smith went on to play a leading role in Operation Jericho, the RAF’s historic raid on the German prison at Amiens in February 1944, during which he piloted a de Havilland Mosquito IV. This model is a brand new Corgi tooling developed using CAD for a high degree of accuracy and detail.