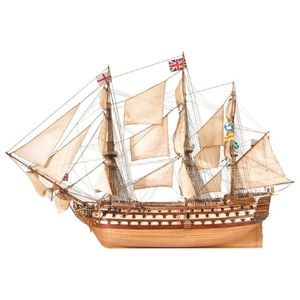 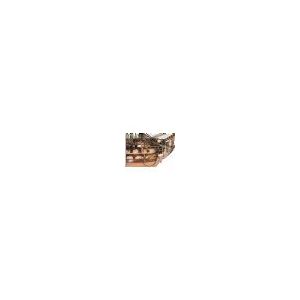 Discover the HMS Victory, a wooden model of one of the greatest legends in naval history, still preserved today in dry dock at Portsmouth as a museum. Guided by our detailed step by step instructions you can complete your replica of this naval myth.

Launched in 1765 at the shipyard in Chatham, it wouldn't be finally assigned to active duty until 1778. On May 30th, 1803 Nelson would be assigned as commander of the ship, taking part two years later in the Battle of Trafalgar. Armed with 104 cannons the HMS Victory would contribute to the English victory providing England a maritime supremacy until the Second World War. Nelson did not know the fate of his victory because he died of a shot from the French ship Redoutable in the same battle.

Build your 1/84 scale model of HMS Victory, an emblematic ship of the line of the English navy. Its construction system using false keel and frames brings the assembly of your model closer to the construction of the actual ship. The model includes laser cut board pieces, hardwood, brass, die-cast and fabric. For the assembly you can follow our complete full-color step by step guide in 7 languages, accompanied by real-scale drawings of the ship. Handy amenities for the assembly of our complete step by step in 7 languages, full-color, accompanied by flat boat.