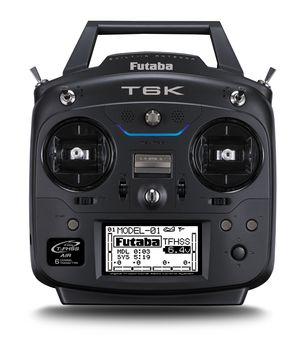 An incredible value in 8-channel control

To get the most radio for your money, check out the new 6K — an easy-to-program flight system with versatile functions that include telemetry, S.Bus/S.Bus2 compatibility and 30 model memory. With Version 2 updates, it's now a better value than ever. The NEW 6K is an 8-channel system with additional telemetry functions, expanded multicopter flight modes and much more.

You'll be hard pressed to find another 6-channel system with as many functions as the 6K at a comparable price. Telemetry sensors monitor critical flight data, including temperature, RPM, altitude, receiver battery voltage, external voltage and variometer. It's compatible with S.Bus and S.Bus2 servos, and setting functions can be programmed through the transmitter. Controls are positioned to be within easy reach, and the menu is a breeze to navigate. Throw in other features such as 30 model memory, a 128x64 DOT backlit LCD screen and updateable software, and it's easy to see how the 6K is a lot of radio for the money.